Muzeek World now has Aviom Digital Snake Systems in stock! The Aviom DS16, DS32 and DS48 are now available. While these systems are all from the same manufacturer, the specs vary between each system.

The Aviom DS16 Digital Snake System is like your basic package. This is a great system to use if you’re working with a small group of musicians. The DS16 comes with one AN-16/i-M Mic Input Module, one AN-16/i v.2 Input Module and two AN-16/o v.4 Output Modules, which all give you a total of 16 mic/line inputs and 16 line-level returns that fits into 6U of rack space.
The AN-16/i-M can be set up on the side of the stage. This takes up to 16 mic/line inputs. The signals are routed to the mixing console through the AN-16/o v.4 that should be positioned at the FOH (front of house). All of the returns are then handled by the two AN-16/i v.2s, with one placed at the FOH and the second set up onstage. These 32 channels are transmitted over a single Cat-5e cable.

The Aviom DS32 Digital Snake System is the perfect system to use if you’re working with a medium-sized group. It gives you 32 mic/line inputs and 16 line-level returns. The DS32 comes with two AN-16/i-M Mic Input Module, one AN-16/i v.2 Input Module, three AN-16/o v.4 Output Modules and two SB4 System Bridges.
All audio data traverses over one Cat-5e cable (up to 500ft/150m) between the stage and FOH (front of house) thanks to the included SB4 System Bridge. I/O devices connect to the SB4 at each end of the digital snake, where a Cat-5e cable can then be used to run from FOH to the stage. All returns are handled by an AN-16/i v.2 Input Module at the FOH and an AN-16/o v.4 Output Module on stage. 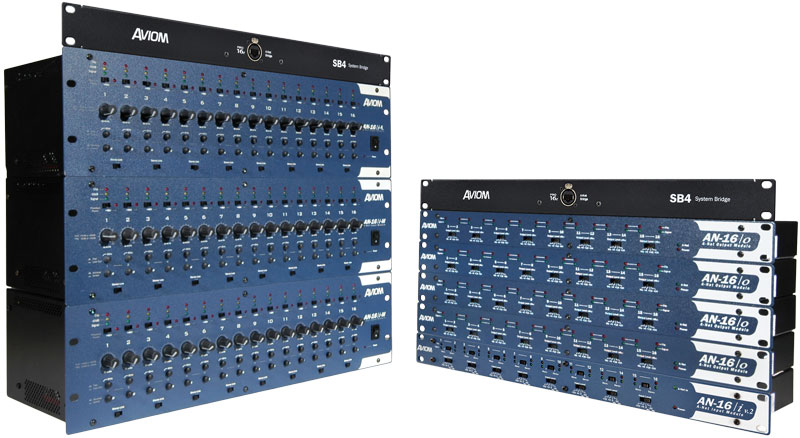 Each input channel on the Aviom AN-16/i-M has a three-segment level meter, a continuously variable gain knob, a phase reverse switch, 48V phantom power and a rumble filter featuring an 85Hz rolloff. The built-in Thru connections act as a digital splitter, which allows the mic input signals to be patched through to other devices. The 16 balanced outputs on the Aviom AN-16/o v.4 is possible thanks to DB25 multipin connectors. All of the analog outputs can be set per channel pair to +24dBu, +18dBu, +4dBu or mic level.

All of these systems can be expanded further through the connection of additional I/O modules.