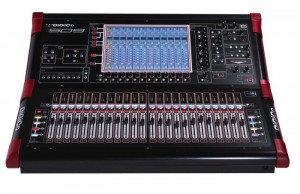 The Digico SD9 is a complete, integrated system powered by Stealth Digital Processing™, which includes the mixing surface, a D-Rack digital stage interface and CAT5E digital multicore, with the additional ability to simultaneously record 56 channels direct to your favourite multitrack software or DAW. And it all comes at a price which makes the SD9 the perfect solution for touring bands, schools, conference centres, smaller theatres, houses of worship and a host of other applications where exceptional performance and flexibility need to be realised on a tight budget.

Worksurface of the SD9

The same attention to detail and ease of use has been applied to the SD9, as to every other console in DiGiCo’s portfolio. Thus, the SD9’s control surface has 24 motorised faders, dedicated and multi-function control knobs and electronic labeling. New Quick access function buttons for even faster response times. It also has a 15”, super high resolution, touch sensitive TFT LCD backlit display. Each bank of 12 faders can be instantly assigned as channels or masters, allowing all 24 faders to control inputs if desired, while any bank of 12 can be assigned to the touch screen for fine-tuning.

The SD9 provides, as standard, a 12 x 8 output matrix, its 8 busses being additional to the console’s 16 stereo, solo and master busses. 48 Flexi channels (mono or stereo) – the equivalent of 96 channels of full DSP processing – and the combined power of the SD9’s technologies means that the number and quality of effects, dynamics or other functions is available to all channels simultaneously, no matter how the console is set up.

The SD9 supplies engineers with a wealth of features, some of which, such as snapshots and the ability to record directly from the remote mic pre amps will be familiar to D Series users. The extensive security facilities are a new feature.

But familiar or not, one thing that is certain is that the only feature the SD9 lacks is a big price tag. In fact, it comes in at a considerably lower cost than anything else in the DiGiCo range – or any comparative console for that matter – but still provides much, much more than it’s nearest rival.

With the new DiGiCo SoundGrid module added to your SD9 console and linked to an external PC server, you’ll have instant access to up to 16 fully integrated low latency Waves stereo processor racks on the SD9, perfect for either front-of-house or monitors.Plus, once registered, you can use your TDM plugins collections too!