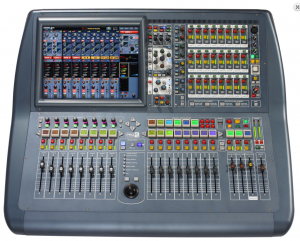 The MIDAS PRO Series Live Audio Systems employs technology developed from the class-leading XL8, offering the same exemplary sample – synchronised audio performance. The PRO series can provide up to 104 simultaneous input processing channels and up to 35 discrete mixes in monitor mode, all of which feature EQ and a choice of dynamics processing options. By adding additional I/O hardware the PRO3, 6 and 9 network can be expanded to 288 inputs x 294 outputs, whilst the PRO2 and PRO2C expands to 156 inputs x 166 outputs with point-to-point routing anywhere within the network which can then be patched and routed on a scene-by-scene basis via a powerful snapshot automation system.
The PRO Series effects and dynamics algorithms are more than superb quality, easy-to use SHARC-based effects processing. They are incorporated within the automatic delay management system, so that wherever they are patched, the audio will be absolutely phase-coherent when summed into your mix. It is possible to assign up to 36 1/3 octave KLARK TEKNIK DN370 graphic EQs, for demanding monitor applications, all of which can be controlled using the optional KLARK TEKNIK DN9331 Rapide moving fader remote. All of this in addition to the four types of compression available on inputs, and five types on outputs. FX options, configurations, settings and patching can change completely with each scene recall. The possibilities are almost endless.
Reliability is designed into all MIDAS products, and all PRO Series hardware elements feature redundant power supplies as standard. The FPGA processing engine on the PRO3, 6 and 9 is of modular construction, with the option of a spare module which will automatically deploy in the event of an engine module failure (n+1 model). Due to its modular configuration the DSP engines of both the PRO3 and PRO6 can be loaded and upgraded to PRO9 specification.
PRO Series digital audio transport uses the international AES50 standard, featuring feed-forward error correction which provides superior protection against lost data packets and synchronization issues when compared to other Ethernet cable based systems. All links between PRO series hardware elements support redundant cables for copper and optical options are available on the PRO6 and PRO9.
The Control Centre for the PRO3, 6 and 9 houses dual redundant Linux master control computers (MCs), both running full versions of the relevant PRO Series Linux software. Either MC is capable of running the entire system on its own and control can be switched between the two without any loss of audio.
Think of an audio mixing system which offers unprecedented levels of control integration in terms of speed and ease of workflow. Think of an audio mixing system which has the most intuitive, operator-driven user-interface yet imagined, yet costs no more than an ordinary console. Think of an audio mixing system which has all of this, and sounds like a MIDAS. Think of the MIDAS PRO2 – Radical thinking – It’s simple!
The MIDAS PRO2 and PRO2C may be the smallest and least expensive MIDAS digital consoles so far; however, they represent a quantum leap forward in both technology and in concept for the art of audio mixing.
PRO2 can be operated in a number of different ways, depending upon the experience, ability and willingness of the operator to adopt new ideas. In “normal” mode, PRO2 behaves in a manner similar to many other digital consoles. Engineers who are new to MIDAS digital can relax, enjoy the PRO2’s sample-synchronous audio quality, and operate the console from well within their comfort zone. As an operator becomes increasingly familiar with the console, they can activate the advanced navigation features which enable access to undreamt of levels of ease and speed of workflow on an audio console. Digital or Analogue!
PRO2 is also available in minimum-footprint compact form, PR02C. Midas PRO2C is essentially the same mixer, the only difference being the physical size of the user interface. The PRO2C features all of the facilities of its larger sibling, yet this 64 channel mixer is no larger than many 24 channel analogue consoles.
Mixer
In addition to the 56 primary input channels, PR02 features 8 aux returns, all of which feature 4-band parametric EQ and insert points. These 8 aux returns can be used as returns for the PR02’s internal FX processors, or as additional mic channels, if enough mic inputs are available on the network I/O hardware.
A total of 64 input channels have routing to 27 mix buses. These buses comprise 16 user-configurable aux buses, which can be mixes, subgroups or mix minus groups, and the 8 matrix buses. The Matrix buses source from inputs, as well as groups, and so can be used as additional auxes (monitor mix and FX sends). All buses can be linked as stereo pairs (except the MONO bus).
All audio paths can be routed to multiple destinations and the console format can be reconfigured live on a scene-by-scene basis.
Hardware
The Console is a typical robust MIDAS steel frame, which employs engineering principles similar to those employed on established products such as PRO6 and XL8. The frame is fitted with two removable power supplies, only one of which is required for full operation. The power supplies are auto-voltage sensing, auto-switchover, fitted with locking AC connectors, and are hot-swappable.
The standard DL251 remote stage-box included with each PR02 system has 48 MIDAS mic/line inputs, 16 analogue XLR outputs and features dual power supplies as standard. The DL251 can be located up to 100 metres (330 feet) cable distance from the console. You can choose from a range of optional I/O including the DL431 mic splitter so you can tailor the hardware to your chosen application.