When integrated with the V-Mixing System, the R-1000 is a powerful tool that will help musicians improve their performance, enable sound techs to deliver a better mix and provide a better interaction between musician, band leader and sound tech.

The R-1000 integrates seamlessly with your customer’s existing V-Mixing System. It installs easily between the Digital Snake and V-Mixer with Cat5e cables allowing the R-1000 to see all 160 channels of audio flowing from Snake to V-Mixer and audio patched to the REAC A and B output patchbays on the V-Mixer.

The R-1000 is seamlessly controlled right from the V-Mixer’s interface for easy patching and arming of tracks for recording along with song selection, marker editing and transport controls.

* Firmware updates for all V-Mixer consoles will be available from RolandSystemsGroup.com shortly. 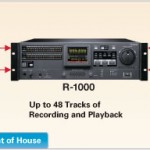 Because the R-1000 is seamlessly integrated with the V-Mixing System, recorded multi-track audio can be played back instantly without any re-patching of digital snake inputs from stage or changing to a special mode.

Now musicians can “hop off stage” and instantly hear their rehearsal performance to check for tuning, tempo and an overall understanding of how their playing fits in the mix. Musicians also benefit by not having to replay their instrument so the sound tech can “dial them in”. One pass by a singer can be looped over and over saving their voice while the sound tech works on mixing their vocal.

For sound techs, they can work on the mix later, on their own schedule without needing the band present. The R-1000 also becomes an excellent training tool for new operators or experienced operators wanting to experiment with a new mixing technique.

When engaged, the Virtual Preamp mode allows the sound tech to work on the audio tweaking of a channel including the gain stage on the pre-amp. As the sound tech is working on a virtual rehearsal with tracks playing from the R-1000, an adjustment made to the preamp on the V-Mixer channel will cause the R-1000 to attenuate the signal to simulate changing the preamp on the input. This will also change the physical Digital Snake preamp in the background so it is at the correct level for the next performance.

* Virtual Preamp control is not available for console inputs

Easiest to Use Recorder on the Market

PC recording is popular for live sound applications but it is still burdened by common computer support issues. The R-1000 is a dedicated hardware appliance built for recording. Roland is the industry leader in hardware recording with hundreds of thousands of hardware multi-track recorders in use around the world. Simple operation from the built-in touch screen interface, Mac or PC RCS (Remote Control Software) and deep control integration from the V-Mixer make the R-1000 simple and accessible to any level of user.
R-1000: 48-Track Recorder/Player
Dedicated 48-Track Audio Recorder and Player
Ideally Suited for Many Configurations and Applications

The R-1000 is an intuitive stand alone, dedicated recorder/player designed to work with the V-Mixing System in any live event or production. You can also connect and use the R-1000 with any digital console that has MADI output capabilities by using the Roland S-MADI REAC MADI Bridge.

The R-1000 is based on REAC (Roland Ethernet Audio Communication) and eliminates the bulk and noise susceptibility typically associated with analog snakes and replaces it with Cat5e/6 (Ethernet/LAN) cable.

Records in Standard Broadcast WAV Format
Records up to 48 tracks of 24-bit audio in BWF format
Removable Hard disk drive ensures smooth integration with DAWs
Approximately 20 hours recording (44.1/48 kHz) using 500GB HDD
Stable and reliable capturing live audio
Multitrack Playback for a Variety of Applications
Plays up to 48 tracks of 24-bit audio via REAC
Data can be loaded from external devices
Marker function enables playback at any designated point
Analog monitor output and a headphone output
Flexible Enough to Fit into any Configuration
Connect with any V-Mixer and control directly from the console
Connect with any REAC Digital Snake product
Versatile feature set including video sync, timecode, GPI and RS-232C
USB ports for backing up data and connecting PC for further software control
Use with any MADI equipped console in combination with optional S-MADI
Ideal for Virtual Sound Checks, Rehearsals, Playback and Training
Connect the R-1000 inline between V-Mixer and Digital Snake for selectable playback or record
Channels can be set to “pass thru” live from the digital snake inputs, record live input or playback from recorder
Run a complete sound check to tune the room in a new venue with no need for musicians to come early
Select the musicians (channels) missing from a rehearsal and continue anyway
Select all or group of channels for selective audio engineering training