Muzeek World is proud to announce that we now carry Genelec Smart Active Monitoring System packages! We carry a variety of packages that include 8320A monitors, 8330A monitors and 7350A subwoofers. Let’s examine the multiple components in these systems.

First, a bit about SAM systems. Genelec Smart Active Monitoring systems are some of the most progressive systems on the market! They boast floating point digital signal processing engines, as well as the Genelec-designed Class D amps found inside both monitors and subwoofers. This technology is proves to be helpful when working with the acoustics of a room. Genelec SAM systems auto-optimize and align all active monitors and subwoofers in the connected network for relative levels. SAM technology gives you a neutral sound stage with minimal distortion. This is true even if you move the monitors to different rooms. 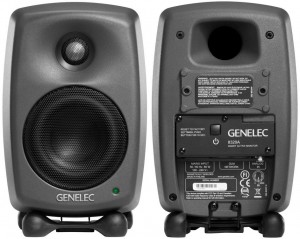 Front and back of 8320A monitor

The 8320A and 8330A Bi-Amplified Smart Active Monitors are compact and can be used in a variety of settings. Music studios seem like a great fit, but these monitors can also be used for outdoor broadcasts, as well as for projection in places of worship. The 8320A and 8330A feature exclusive technology from Genelec, like MDE (Minimum Diffraction Enclose), DCW (Directivity Control Waveguide) and AutoCal. AutoCal automatically (should you choose) aligns levels, timing and equalization for every monitor. These monitors also have flow optimized reflex ports (one per monitor) and neutral frequency response.

The 7350A Bi-Amplified Smart Active Subwoofer is a beast! It offers great low-end sounds and is designed to compliment the 8320A and 8330A monitors. Each 7350A comes with Genelec-exclusive LSE (Laminar Spiral Enclosure) for a low cut-off and clean bass reproduction. These subwoofers also come with Genelec AutoCal, similar to the monitors. 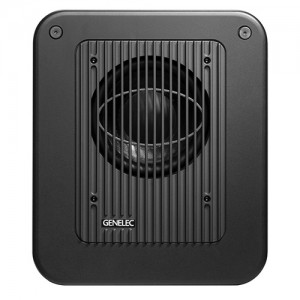 One of the greatest things the Genelec SAM systems offer is the new Genelec Loudspeaker Manager (GLM) V2.0. This new and improved software is user-friendly and acts as a powerful monitor control networking system. GLM V2.0 manages the connectivity to all 8300 series monitors and all 7300 series subwoofers on one network, able to oversee up to 25 8300 series monitors and up to five 7300 series subwoofers. It has an interface designed to make setups and calibrations simple, yet effective. The computer control gives you consistent performance and reduces the perceived differences between monitor/subwoofer positions and sound environments. GLM V2.0 interfaces with AutoCal to take advantage of its automated acoustic system-wide, self-calibrating algorithm. You can have an unlimited number of system setup files, all of which can be created and grouped within one system setup file for analog and digital input use. The cherry on top of this software is a software fader that can be used for volume control. And if you don’t like soft faders, you can always hook up your favorite piece of external hardware to control the volume with a physical fader.

The Genelec SAM systems are powerful, compact and easy to use. No matter which package you choose, you’ll be satisfied with great, neutral sound stages!